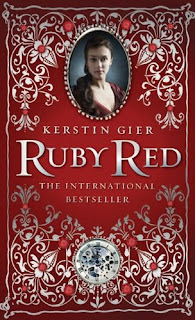 Annotation:  Gwyneth has always known that her beautiful cousin Charlotte is the member of her generation to inherit her wealthy family’s biggest secret: a gene that allows the carrier to time travel. But when Gwyneth suddenly starts travelling through time herself, could her family have been wrong about Charlotte being the gene carrier?
Personal thoughts:  I think the premise of this book saved it from what I found to be a very slow pace. For some reason it just seemed to take a long time for the action to really get going, but once it did I began to see a lot of potential. I think Gier does a great job of setting the stage for the real adventure to come in the rest of the series. I look forward to seeing how it pans out.
Plot summary: Sixteen-year-old Gwyneth Shepherd lives as normal of a life as she can being the member of a wealthy family who, every generation, give birth to a female time traveler. Gwyneth has always known, as has the rest of the family, that her beautiful and sophisticated cousin Charlotte is the carrier of the time travelling gene, having fulfilled a centuries old prophecy of being born on October 7, 1994. Gwyneth, who’s birthday is October 8, never suspected the truth: that her mother lied about her birth date to protect her from lifelong preparations for travelling through time. It seems that Gwyneth was actually born on the 7th and is the actual gene carrier. Now, she is thrust into the middle of the web of secrets that has ensnared her family for generations. To make matters worse, she must also contend with her time-travelling counterpart, Gideon, a member of another wealthy family who give birth to a male time traveler with each new generation. Gideon is handsome, but too stuck up for Gwyneth who he, and everyone else, is convinced is just a silly girl, incapable of being as fit for navigating the past as the well-trained Charlotte would have been. Will Gwyneth be able to handle her new found gifts and the secrets that come with them?
Review:  With a promising premise, Ruby Red makes for a slow start to what will surely blossom into an entertaining trilogy. Gier appears to be using the first novel in this new trilogy to set the stage for adventure. There is a lot of character development, particularly of the heroine, Gwyneth, and a great deal of background about Gwyneth’s family legacy. Gwyneth’s actual emergence as the real female time traveler and dethroning of her stuck-up cousin, Charlotte, are the primary plot points in the novel, as well as her budding romance with fellow time-traveler, Gideon. Some more sinister characters are introduced, but are not really expanded upon, something that will hopefully occur in the next installments. Overall, Ruby Red is a light-hearted and slow-paced beginning to a trilogy with a lot of potential. Hopefully Gier will deliver an even better second installment with Sapphire Blue set for release in Spring 2012.
Genre: Fantasy/Historical Fiction
Reading level: Grade 7+

- How do you think her cousin being considered the gene carrier for most of her life influence the way Gwyneth was raised? Do you think her life would have been different if she was treated the way Charlotte was?

- What was your first impression of Gideon? Did that change while reading the book?
- Do you agree with what Gwyneth's mother did? Why or why not?
- What would you like to learn to prepare yourself for time travel?

Hylary
Welcome to my blog! I'm a librarian who loves to read...unusual, right? This blog contains my reviews and thoughts about the books I read, and other information for tweens, teens, parents, teachers, librarians and anyone else who loves books. Enjoy!

Add blog to our directory.